The Spirit of GAMBO & friends

The internationally recognized "The Spirit of Gambo" brings a world of forgotten sounds into life again. The exquisite tonal quality, the balance between instruments, and the richness of musical content captivate any listener, giving them the feeling of being directly transported back in time and leaving them deeply rewarded.

The Spirit of GAMBO

The – mainly instrumental – music of John Jenkins (1592 – 1678), one of the most prolific composers of 17th century England, shows an interesting development from late-Renaissance to Baroque. Early works are the polyphonic fantasias for four-, five-, and six-part viol consort. In those days Jenkins presumably was active in London, where he was part of the music circles of the court of Charles I. Hardly anything is known about this first half of Jenkins’s life, but there is mention of him as a musician for the magnificent pageant “The Triumph of Peace” which took place in London in 1634.

The chamber music pieces on this CD must have originated during the time that Jenkins was staying with the Dereham and L’Estrange families. Whereas the music by Lawes often has a bold and angular character, the compositions by Jenkins from this period are clearly intended as compensation for the unsettled and perilous circumstances prevalent during the troublesome civil war years.

These chamber music works indeed have a lyrical, balanced and reassuring character. They will no doubt have had a soothing effect on both players and listeners. A curious aspect of many of these dance-like pieces is the high level of technical skill required of the players.

The Spirit of Gambo-Recordings in Haarlem, The Netherlands, March 2019

Haarlem is a small picturesque town in the Netherlands. In the center of the town, without a steeple and almost invisible, is the Mennonite church of the Doopsgezinde Gemeente (www.vdgh.nl). The sanctuary of the church is astonishing with its unprecedented acoustic qualities. All variations of miking are possible here without acquiring problematic room responses. Stockfisch has already been there for four recordings with The Spirit Of Gambo, and we are not the only sound professionals who are thrilled by its extraordinary ambience.

The only drawback is (was) the electrical wiring. Like in almost all churches (not only in the Netherlands), they wanted to hide the electric lines as inconspicuously as possible. Instead of installing thick surface-mounted lines, they scratched the grout in the wall joints just deep enough to embed cables with the thickness of bell-wire. This resulted in voltage and current losses. For our third recording in 2011, we had to import power from a neighboring house because additional RF interference and amateur radios caused audible disturbances. For this new recording we had taken precautions, although in the meantime a central power line was installed in the church, which was of a typical, mediocre quality.

Our power regenerator PS-AUDIO STELLAR 3 converts AC power into DC, removing distortion and unwelcome harmonics. It’s then converted back to constant AC. We also use these current conditioners in our studios and it results in audible improvements in sound.

To further avoid EMC interference, we used ferrite-coated, shielded power cables from EUPEN and self-modified microphone cables from VOVOX with RF absorbing NEUTRIK XLR fittings. At first glance, this effort may seem a bit exaggerated, however, the sonic result is convincing! There is exact depth gradation with no blurring in the positioning of the instruments, which wouldn’t have been possible without external power conditioning and RF suppression. 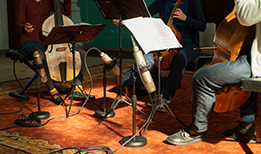 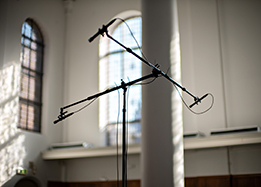 I decided to use two microphone systems: VOX-O-RAMA U49 tube microphones by Andreas Grosser for close miking each viola da gamba, and a Decca-Tree with three DPA 4041s for spatial imaging.

The U49 has been the most important microphone discovery for me since the beginning of my career. Two steel tubes (EF12K and EF11) share the amplification load which results in a sensationally low noise level of 8 dB (A). This is a value that only a few transistor microphones can match. The U49s transmit power and physicality like nothing I've ever experienced.

DPA 4041 microphones (which we used in a Decca-Tree configuration) are in a special league. Working at 130V (instead of 48V phantom power), they are the 'fastest' microphones. While mixing this album, the ambience of the church was reproduced only by adjusting the relative volumes of both microphone systems, without using any artificial reverb. Those who can listen quadraphonically, need only close their eyes to authentically experience the ambience of the church’s sanctuary.

Microphone preamps are sound-creating elements. The m801mk2 from GRACE in Boulder, Colorado, is a remarkable mic-pre. There are no electrolytic capacitors in the signal path, only film capacitors. As a transconductance amplifier, it produces an output current proportional to the input voltage. The subsequent amplifier stage then generates an amplified voltage. The transfer of current between the two amplifier stages ensures broadband and low-noise operation. This concept is also often found in tube amplifiers. 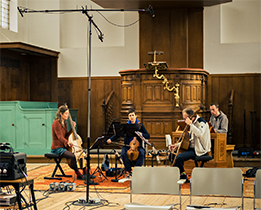 From the beginning, Super-Audio-CD has been the preferred format for Stockfisch releases. The possibility of multi-channel and its 1-bit resolution provides a very good basis. The 5.1 video format, on the other hand, has drew very little interest in our audiophile world. The bottleneck most certainly is the center speaker during recording and playback. It would be nice to place voice and certain instruments on the center speaker. In the domestic living room, however, the center channel is usually handled only by a small transverse speaker on which the TV set is placed, thus rendering it unusable for decisive central sounds. Quadrophony is an excellent solution to achieve realistic imaging in recording and playback. For the ambitious listener, two additional speakers are a manageable expense. In the future, for certain room-accented recordings Stockfisch will continue to offer the 4.0 format on the SACD in addition to the stereo layer.

Orlando Gibbons (1583 - 1625) was one of the most important and highly regarded musicians of his days, both as a performer on keyboard instruments and as a composer, particularly of polyphonic vocal music. The greater part of Gibbons’ output is sacred vocal music intended for practical use in prestigious places. In addition to services, he wrote a vast number of anthems, both full and verse, in many of which a consort of viols was required to provide an independent accompaniment. His output of secular vocal music was small compared to that for the church, and his only book of madrigals was published in 1612. Gibbons’ polyphonic madrigal style is nearer to his instrumental fantasias, but several of the compositions would appear to be solo songs with viol accompaniment, e.g. the famous song "The silver swan".

On this SACD you will hear the first (!) recording of the complete "First Set of Madrigals und Mottets of 5. parts". The ensemble „The Spirit of GAMBO“ was glad to win the famous baroque soprano specialists Claron McFadden and Aleksandra Anisimowicz over to sing the upper vocal parts.

This very exciting Stockfisch production was recorded in the Doopsgezinde Kerk, Haarlem (NL), which is world famous for his special acoustics. Therefore we recorded the Gibbons sessions using a surround microphone setup. So we can offer besides the CD-Hybrid-Layer (16bit) also an DSD-stereo-mix and a 4.0 multichannel-mix. The 28 page booklet contains very detailed informations of early baroque music, the composer and historically informed performance.

Performing on "The Silver Swan":

Orlando Gibbons (1583 - 1625) was born in Oxford, but moving with his family to Cambridge as a child, Gibbons became a chorister at King’s College between 1596 and 1598 and entered Cambridge University as a student in 1599. In May 1603, his name appeared on the cheque book of the Chapel Royal as a signatory to conditions of service in the choir under King James I, and by 1615 he was one of the two organists there. In addition, he was appointed organist of Westminster Abbey in 1623, and still held both these posts until his sudden death in Canterbury in 1625.

The greater part of Gibbons’ output is sacred vocal music intended for practical use in prestigious places. In addition to services, he wrote a vast number of anthems, both full and verse, in many of which a consort of viols was required to provide an independent accompaniment. His madrigal collection “Madrigals and Mottets” is one of very few works actually published during his lifetime.

The English madrigal had a late flowering when compared with the Italian, but when at last it did bloom, it was both prodigious and astonishing. Gibbons’ collection with its title “Madrigals and Mottets” suggests a more serious approach, the term “motet” being used to denote a more profound composition. And indeed, the poems are both serious and sombre, and are taken from the great writers. 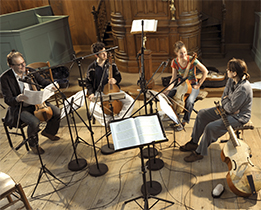 „The Spirit of GAMBO“, the leading Dutch performers on the viola da gamba, focuses on consort music, a genre mainly intended for performances among family or friends, and usually played on between four and six viols. The tradition reached its peak around 1600 and the ensemble concentrates on the English composers John Jenkins, Orlando Gibbons, William Byrd, and Christopher Simpson. Thanks to both its abundance and its quality, this repertoire offers an inexhaustible supply of riches.

Over the time The Spirit of GAMBO has built up a unique collection of instruments - mostly built by the ensemble member Gesina Liedmeier - in order to convey the full richness of the consort repertoire. Its concerts represent a fascinating quest in the world of lost sonorities and forgotten atmospheres.

For this Hybrid-SACD the internationally acclaimed ensemble "The Spirit of Gambo" recorded Dutch music for viola da gamba from the 17th century: Accompanied by violin and harpsichord they perform compositions from the viola da gamba virtuosos Johan Schenk, Christiaen Herwich and Philippus Hacquart.

The special sound of the gambas, the pieces sparkling with musical versatility and the musicians of The Spirit of Gambo performing with incredible virtuosity form the fascination of this SACD - likewise relaxing and exciting for the listener.

performing on this album "the galaxy recordings" :

For this recording, we chose a specialised room with defined room acoustics and an extreme isolation: The large concert hall of the GALAXY studios in Mol, Belgium. The complete studio complex is suspended upon gigantic steel springs that absorb low frequencies down to 3 Hz. Extraneous noise outside the building is dampened by more than 100 dB.

We installed our own state of the art technology for recording in this hall and so had the ideal ambience for the 3 types of recording configurations to be presented on a 3 layer Hybrid SACD for optimal comparison. A Meitner emmLABs 24-bit, 8ch A/D converter was responsible for the conversion to PCM for the CD layer of the SACD.

The DSD conversion for the stereo programme was meticulously handled by the excellent AX24 1-bit converter from Digital Audio Denmark. The AX24 converted both signals from the main microphones to a true DSD signal. Listeners who have a SACD player will thoroughly enjoy the purest, technically non-manipulated, 2 channel versions of these recordings.

The 3rd layer of the SACD contains a 5.0 surround mix using all the microphones to reproduce the acoustical ambience in the concert hall of the GALAXY studios.


During another recordings session with The Spirit of GAMBO in the Laurentiuskerk, Mijnsheerenland near Rotterdam, we filmed the performing, rehearsals, and engineering on location. The blu-ray Disc documentating this session will be released later, but you are invited to look at some previews on the Stockfisch YouTube-Channel..

Back to the roots - the Dutch ensemble The Spirit of GAMBO takes us on a journey back through time to the beginnings of modern instrumental music, the "Stilo Moderno" of the 16th and 17th century.

"The Spirit of Gambo" is feeling and expression, harmony and dissonance – a diversity of sound combined with instrumental virtuosity, played on the instruments of the time. The combination of gambas, theorbes, lutes, small organs and harpsichord have produced a fascinating CD, captured in amazing quality using state-of-art 22bit digital recording technology (1996).

Sorry, this CD is OUT OF STOCK.

These releases are available for you in our professional online shopping-cart system. Payable with credit-cards or PayPal - of course via safe SSL connection. Normally orders will be dispatched the next working day.